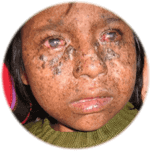 Xeroderma is a condition in which the skin contains relatively too little moisture, feels dry and sometimes a little flaky and may itch. This is often caused by lack of a protective fatty layer. The upper skin layer has microscopic cracks, loses a lot of moisture and dries out. Xeroderma is usually not serious, but can be very nasty.

There are several reasons why the skin can dry out:

The most common signs and symptoms of xeroderma are:

A patient often doesn’t suffer from xeroderma over the entire body but, for example, only in the face, hands, arms or legs.

The doctor can often make the diagnosis of xeroderma by watching and feeling the skin. Further examinations are normally not needed, but when in doubt, the doctor can remove a piece of tissue (biopsy) for analysis.

Many cosmetic products are freely available for the care of xeroderma. This includes an ointment, cream or lotion that contains fat and is applied to the skin. If a person is allergic to specific substances in these products, the general practitioner or dermatologist can prescribe ointments and creams that don’t contain these substances.

Xeroderma is a condition that can easily come back if the cause is not properly addressed. Most patients who adhere to the regimens and treatment described here, remain symptom-free.

There are some things that can be done to remedy xeroderma or prevent the occurrence of xeroderma. After about a week, the skin barrier is repaired: