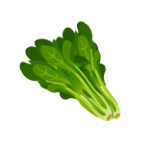 Vitamin K is needed for blood clotting in case of bleeding. It is also important for strong bones. Vitamin K can be divided into vitamin K1 and various forms of vitamin K2. The third variant, vitamin K3, is the synthetic form of vitamin K.

Vitamin K is partly created by the bacteria in the large intestine. This quantity, however, is not sufficient, so supplement from food is necessary.
Green leafy vegetables contain a lot of vitamin K1. Vitamin K1 is also found in vegetable oils and in lesser amounts in fruits, dairy products and bread. Vitamin K2 is in particular found in cheese, egg, chicken, meat and milk products. Supplements may include both vitamin K1 and K2.

Newborn babies (up to three months) receive extra vitamin K to prevent (cerebral) bleeding. They didn’t get a stock of vitamin K from the mother and are not yet able to sufficiently produce it themselves. Adults who use antibiotics for a long time can also have vitamin K shortages, wich may result in delayed blood clotting. Antibiotics can destroy intestinal bacteria that help in the production of vitamin K.

No adverse effects are known of a high intake of vitamin K. In practice, an excess of this vitamin doesn’t occur. People using blood thinners or anticoagulants, should be careful with high-dosed vitamin K pills. These may reduce the functioning of the anticoagulant.