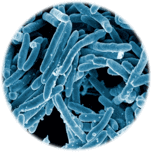 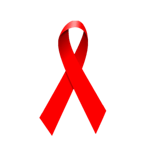 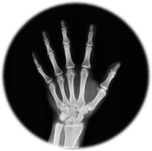 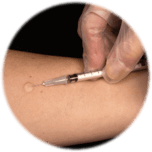 Tuberculosis is caused by the bacterium Mycobacterium tuberculosis. This bacterium spreads through droplets in the air, caused by sneezing or coughing by someone who has open TB. When a person inhales these droplets, he or she can become infected. Only ten percent of the infected people get sick. The individual’s immune system is often strong enough to keep the bacterium under control. The bacterium can remain dormant and at a later time, for example when the immune system is weakened, become active. After infection, it can therefore last eight weeks to life-long before the first symptoms occur.
With the emergence of HIV and AIDS, the number of cases of tuberculosis has increased as well. This disease namely damages the immune system, allowing the TB bacterium to be combated less well and a dormant bacterium can become active.

Some signs and symptoms of tuberculosis are:

The diagnosis of tuberculosis is made with the aid of an X-ray and a Mantoux test. With the Mantoux test, tuberculin, a component of the TB bacterium, is injected under the skin. If the skin gets red and swollen after a few days, it means that antibodies against the bacterium are made and one carries the bacterium with him or her or had prior contact with the bacterium and/or has been vaccinated for tuberculosis.
If a person coughs up mucus, this mucus is also examined for the presence of bacteria in order to find out whether one has open or closed tuberculosis. In case of open tuberculosis, it is important that the people with whom the patient has regular contact, are also examined. It may be that they are infected.

The treatment of tuberculosis includes taking antibiotics for six months. The patient often receives a combination of medicines to prevent that the bacterium becomes insensitive (resistant). It is therefore important to fully complete the course.
In addition, keeping a good ‘cough hygiene’ is important, especially in case of open tuberculosis. Always cough and sneeze into a handkerchief or with the elbow to the mouth in order to prevent spreading the bacteria.
There is a vaccine for tuberculosis, but this is given according to strict guidelines. Only people who go regularly or prolonged to a country where tuberculosis is common and thus have a high risk of being infected, are candidates for this vaccine. Examples are children of immigrant parents who frequently visit family in their home country and travellers who go on a journey for more than three months to a country with a lot of tuberculosis.

With treatment, a person recovers completely. If not treated, about half of the people die from tubercolosis. TB bacteria develop relatively slow compared to other bacteria. An untreated TB infection will therefore slowly get worse. Sometimes it occurs that people survive without treatment and even recover. The prognosis is worse when the disease is difficult to treat. For example, because there are also other diseases, such as HIV/AIDS, or because the TB bacterium is highly resistant to multiple antibiotics.