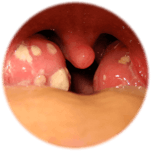 Tonsillitis is an inflammation of the tonsils and occurs mainly in children. It’s very contagious. The tonsils are two glands in the throat and are part of the lymph node system, which combats infections in the body. When too many pathogens, such as bacteria and viruses, enter the body, the tonsils themselves get inflamed and swollen.

An inflammation of the tonsils is usually the result of a viral infection, but can also be caused by bacteria. Bacterial tonsillitis is often caused by streptococci. A fungal infection may also lead to tonsillitis.
Viruses and streptococcal bacteria spread through the air by coughing, sneezing or talking. A person can get infected by direct contact with mucus from the nose or throat of an infected person. Infection occurs primarily when the circumstances for the spread of these pathogens are favorable, for example in places where large groups of people are densely packed, with inadequate ventilation. After infection, it takes one to three days before the first symptoms occur.

The main symptoms of tonsillitis are obviously the inflamed tonsils themselves. This can be recognized by some sort of white layer over the tonsils. Other signs and symptoms include:

Other symptoms that may occur as a result of tonsillitis are: poor sleeping, snoring, excessive breathing through the mouth and repeated ear infections.
Tonsillitis in a child is found when the child is sick and no longer wants to eat. The throat hurts, especially while swallowing. The child seems somewhat flu-like.

The doctor may want to look at the tonsils and sees generally soon if they are inflamed. If necessary, examination can be done with a smear from the throat. This in order to determine the diagnosis with certainty.

The general practitioner can, if necessary, prescribe antibiotics. In case of chronic tonsillitis, the tonsils are often inflamed. Scars arise, which make it harder to treat in a subsequent attack. When this is the case or if the tonsillitis causes complications, it may be better to surgically remove the tonsils. This is done only when no other solution can be found, because the tonsils are part of the immune system of the body.
The surgical technique that is used, varies in adults and children. In children, cutting the tonsils is a commonly used method. Here, the tonsils are entirely removed with one single movement. In adults, tonsils are much firmer attached than in children, thus cutting is not possible. Instead, the tonsils are peeled. Peeling means that the tonsils are gradually detached from the bottom tissue layer. Removing tonsils in adulthood generally causes more and longer pain than at young age.

In most cases, tonsillitis can heal properly and the condition disappears in seven to ten days. Bacterial infections tend to respond positively to treatment with antibiotics. The symptoms of tonsillitis usually reduce in two to three days after start of the treatment. Surgical removal of the tonsils is usually successful.