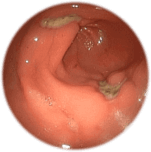 A stomach ulcer is a kind of wound in the mucosa of the stomach and causes pain in the upper abdomen. Sometimes, the ulcer is found in the stomach itself, but usually slightly beyond the exit of the stomach, at the beginning of the duodenum. Thanks to better treatment options and more knowledge about the cause, stomach ulcers are nowadays less common than before.

In case of a stomach ulcer, a hole is formed in the protective mucous layer of the stomach or the duodenum. The acidic and aggressive gastric juice comes into contact with the nerves in the wall of these organs. A stomach ulcer is usually caused by the bacterium Helicobacter pylori. After infection, it takes several days before the first symptoms occur. The use of certain painkillers can also lead to a stomach ulcer.
Other risk factors for the development of a stomach ulcer are: hereditary factors, alcohol and smoking. It is often thought that stress is a cause of stomach ulcer, but this is not the case. Stress can change a person’s diet. Some people start eating a lot of extra food when they suffer from stress, others can’t even eat anymore. The gastric acid production just continues. Both cases can worsen stomach problems.

Signs and symptoms that occur in case of a stomach ulcer are:

The diagnosis of stomach ulcer is made by means of gastroscopy. This is an exploratory examination in the stomach and duodenum. In the stomach, the doctor can take small pieces out of the mucosa. These pieces of tissue are examined in the laboratory, in order to determine the cause of the ulcer. This way, a possible bleeding can be treated as well.

A stomach ulcer that is caused by the Helicobacter pylori bacterium, is treated with two different antibiotics and an antacid. The antibiotics ensure that the bacterium disappears and the antacid stimulates healing of the stomach ulcer. In about ninety percent of cases, the bacterium will disappear after these medications: the symptoms disappear and don’t come back.
If no bacterial infection has been demonstrated, only antacids are prescribed. By making the gastric juice (temporarily) less or not acid, the hole in the mucosal layer can restore.

After treatment and especially when the cause is known, the prognosis is exceptionally good. By treating the stomach ulcer, the bacterium disappears in the vast majority of cases. Thus, the symptoms should also disappear.

The following regimens and dietary advices are important: