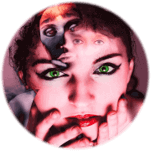 Schizophrenia is when a person has gone through a long-term psychosis or multiple psychoses and doesn’t function properly in the intervening periods. A psychosis is a condition, in which a person’s contact with reality is severely disrupted. People with schizophrenia often make a confused impression. Schizophrenia is a serious and complex psychiatric disease.

Schizophrenia is usually caused by a combination of biological, psychological and social factors:

People with schizophrenia have various signs and symptoms:

The diagnosis of schizophrenia is made by means of psychiatric examination. This includes a conversation with the patient, the observation of his or her behavior and gathering information from relatives. Information about the history is also important. Additional tests, such as blood tests or brain scans, are sometimes needed in order to exclude other disorders.

Schizophrenia cannot be cured, but is usually well treatable. The sooner treatment starts, the better the expected results. With therapy and medication, it’s often possible to gain control over the disease and learn to use the capacities and capabilities that remain: