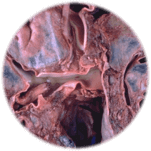 Sarcoidosis is a disease, in which many different organs can be inflamed. Sometimes there are visible swellings under the skin (granulomas). These are accumulations of white blood cells. There may also be scar tissue. Scar tissue and many granulomas can ensure that the organs are no longer able to work properly. There is an acute form and a chronic form.

The exact cause of sarcoidosis is not yet clear. Research has shown that heredity and environmental factors are believed to play a role. There are a number of known substances that could lead to a response of the immune system in people with sarcoidosis: beryllium, aluminum, titanium, zirconium, glass wool, rockdust, talc, chalk and flour. Sarcoidosis is not contagious.

The symptoms of sarcoidosis vary significantly from patient to patient and depend mainly on the organs and tissues in which inflammation is or has been present. The lungs and lymph nodes are the organs that are most commonly affected, but the disease can also occur in other organs and tissues, such as the skin, eyes, heart, bone marrow, spleen, liver, kidneys and all structures that have to do with the nervous system, the musculoskeletal system, the endocrine system and reproductive organs.
Common signs and symptoms are:

The diagnosis of sarcoidosis is often made based on the symptoms and physical examination. Several blood tests and imaging studies are done in order to confirm the diagnosis. Of the imaging studies, normal X-ray photographs of the chest are the best method to determine whether there is sarcoidosis. Often, people don’t suffer from the disease when it occurs and the disease is only detected by defects demonstrated on a chest X-ray. In some patients, additional examinations are needed, such as CT scans of the chest, lung scan, pulmonary function tests and organ biopsy.

Sarcoidosis can currently not be cured. Because the disease may occur in various organs and tissues, the treatment of each patient is different. Not every patient requires, for example, treatment with medication. Treatment of sarcoidosis is possible with:

The prognosis varies. Most people with sarcoidosis recover spontaneously within one to two years. In ten to fifteen percent of the cases, the acute stage of the disease passes into a chronic. In negroid patients, the disease often appears to run longer and more severe. An age of more than forty years often leads to a delay of spontaneous recovery.