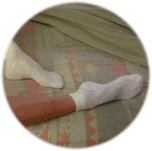 Restless legs syndrome (RLS) is a disease, in which a person always has the urge to move the legs. Sometimes, the same applies to the arms or feet. If that person moves, the urge will decrease, but after sitting or lying still for a while, the urge increases again. In the evenings and at night, the urge to move is higher. This can lead to poor sleep and fatigue.

The exact cause of RLS is unknown. In some patients, the disease is (partly) hereditary determined. Furthermore, a disorder in iron or dopamine metabolism seems to play a role. Dopamine is a substance that is important in the transfer of signals between nerve cells. From some diseases or circumstances, it is known that they can cause or worsen RLS, for example pregnancy, Parkinson’s disease, iron shortage, renal dysfunction, thyroid problems and certain medicines. In the majority of patients, however, no specific cause can be identified.

RLS patients have symptoms of an unpleasant itching, tickling or restless feeling in the legs. The symptoms occur particularly during rest and are worse in the evening and at night than during the day. Patients have an almost irresistible urge to move the legs. While moving, the symptoms decrease but once the movement stops, the symptoms increase again. For a large proportion of patients with RLS, there are also short-term, jerking movements of the arms or legs during sleep. This is known as periodic limb movement disorder. The shocks are often particularly noticed by the partner, rather than by the patient himself. The unpleasant feeling in the legs and the nightly shocks can seriously disturb sleep and therefore have a negative impact on the overall well-being.

The diagnosis of RLS is made on the basis of the symptoms of the patient. Blood tests can determine whether there is, for example, an iron shortage. Incidentally, additional tests are done, such as a sleep study.

The treatment starts with medications. Any iron shortage will be supplemented first. Most people benefit from using dopamine agonists. These are drugs that affect the transfer of impulses between brain cells. The drugs are taken before going to sleep.

The disease will not be cured, but can be kept under control with changes in lifestyle and medication.