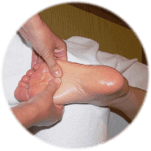 Reflexology is a pseudo-scientific alternative treatment method which assumes that some parts of the body, like hands and feet, reflect the entire body and that inspection of hand or foot sole provides a diagnosis. Pressing specific places improves the condition of the body.

According to reflexology, all organs and body parts are connected to places on the feet. The sole of the foot is divided into zones, which correspond to parts in the body such as the heart and the liver. Massage of these zones restores and/or maintains an unobstructed energy flow throughout the body. On the sole of the foot can be felt with which corresponding organ something is going on. Reflexology believes that energy flow is the basis of our health and that disease would be the result of energy blockages. From this point of view, it is then important to remove that blockage, so that the body regains its balance and the symptom will disappear.

Reflexology is used for the following conditions:

During the intake, the symptoms are identified by a series of questions. A personal treatment plan is then made. The intake is finished with a reflex zone massage. Subsequently there are follow-up appointments. Once a week is generally sufficient. Depending on the question and/or the symptoms, it can be considered how many treatments are needed.

Reflexology has a major impact on physical and mental relaxation. The treatments are aimed at the total person. This means that physical, emotional and mental imbalances are mapped out and attempts are made to bring them back in harmony.
Because every person is unique, the treatments are tailored to the person. Massage of the reflex zones can be applied to many symptoms. It can also be used as a preventive measure to keep the body and mind in balance, thus reducing the risk of disease. It is vitalizing and relaxing.