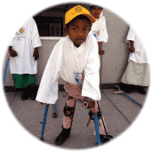 Polio is a highly contagious and sometimes fatal viral infection that affects the nerves and can cause permanent muscle weakness, paralysis and other symptoms. The disease is the result of an inflammation of the gray matter in the spinal cord. Despite vaccination, the disease still exists worldwide.

Polio is caused by the poliovirus, an enterovirus. There are three types of this virus. Polio can be transferred directly from person to person or via food or water that an infected person has been in contact with. The virus is usually found in the stool of patients. Poor personal hygiene and poor sanitation contribute to the spread of the infection. The poliovirus enters the body through the mouth or nose. As it ends up in the blood, it may affect the neural pathways and nerve cells in the spinal cord or brainstem. Often, people are infected with the poliovirus, but are not sick themselves. They can, however, pass the virus onto others. This is done primarily by contact with feces, infected saliva by coughing or sneezing and contaminated water. There is also evidence that flies can transfer the poliovirus from feces to food.
The infectious polio period is not exactly known, but probably it lasts from a few days before to several days after the beginning of the symptoms. The virus leaves the body with the stool. After infection, it usually takes six to twenty days before the first symptoms occur.

The infection usually passes unnoticed and causes no symptoms. In some form, the disease sometimes cures on its own in the early stages. This form of polio is characterized by fever, headache, sore throat, loss of appetite, abdominal pain and muscle pain. The symptoms persist for a few hours to several days and the patient recovers within a week.
The other form of the infection is characterized by irritation of the membranes that surround the brains and spinal cord. Patients have fever, headache and a stiff neck and back. Two days later, paralysis in the painful parts of the body occurs, due to major damage to the nerves concerned.
The muscle paralysis is often asymmetrical, that is to say that one side of the body is more affected than the other side. Many people recover completely, in which the muscle function can return to a certain extent. However, if the muscle weakness or paralysis persists longer than twelve months, no further improvement usually occurs.

The diagnosis of polio is made on the basis of the symptoms. The diagnosis is confirmed by identification of the poliovirus in a stool sample and by many antibodies against the virus in the blood.

Polio cannot be cured and the currently available antiviral drugs won’t influence the course of the disease. Thus, treatment focuses on relieving the symptoms. Painkillers are used for the headache and muscle pains. It often occurs that the muscles, which are involved in breathing, get paralyzed, leading to difficulty in breathing. Ventilators may be needed when the respiratory muscles are weakened. The equipment often needs only to be used temporarily. Once the acute phase is over, physical therapy, orthopedic footwear and surgery can be needed to ensure that the muscles get their strength back as much as possible and start functioning as well as possible.
Nowadays, the major part of the Western population has been vaccinated against polio. Vaccination with the DTP vaccine offers protection against diphteria, tetanus and polio.

Approximately half of the people with the severe form of polio recovers without becoming paralyzed. A quarter is slightly disabled and another quarter is seriously paralyzed. In some children, even children who seemed to have recovered completely, muscle weakness occurs again or existing muscle weakness gets worse, fifteen years after a polio attack. This condition, post-polio syndrome, often results in severe disability.