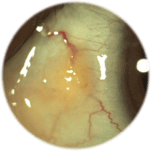 Pinguecula is a swelling in the mucosa of the eye, close to the edge of the cornea. A pinguecula is pale yellow colored and usually emerges at the nasal side of the eye. The condition is benign and does not grow into the cornea. It is common in a large portion of the population, especially in people who are outdoors often.

The exact cause of pinguecula is not known. Factors which seem to influence the development of this condition are:

Pinguecula seems to be formed due to an accumulation of proteins.

Pinguecula is a harmless condition and is usually unnoticed. However, the eye may sometimes be red more quickly and feel irritated at the side of the pinguecula. A person can have an abrasive feeling, as if there were sand or rough particles in the eye. Wearing contact lenses can be problematic, because the contact lens touches the thickening. The symptoms caused by the condition may be mild or severe. The size of a pinguecula can range from a small vesicle to a coverage of the entire white of the eye.

The ophthalmologist can determine the diagnosis of pinguecula on the basis of the appearance and the location of the condition.

Generally, no treatment is required for pinguecula. When the eye gets irritated by pinguecula or becomes inflamed (this rarely happens), it may be necessary to treat the eye with artificial tears and/or anti-inflammatory drops. If the eye drops have insufficient effect, or if the patient has cosmetic problems with the pinguecula, surgical correction may be considered. Such a procedure is particularly important if a pinguecula:

Pinguecula usually causes no problems, but it can slowly enlarge. A surgical procedure usually doesn’t lead to complications, although the pinguecula might grow back again afterwards. The doctor can provide medication or superficial radiation therapy in order to prevent this.