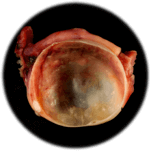 An ovarian cyst is a cavity in the ovary, filled with moisture. As a result, the ovary is usually larger than normal. The moisture in the cyst varies from bright, thin and watery to turbid, thick and viscous. The size of the cyst ranges from a small bean to a considerable melon. Large cysts can cause abdominal pain.

During a normal menstrual cycle, an egg matures in the ovary, surrounded by a cluster of cells. The egg and the cells together are called ovarian follicle. If the egg is mature, the follicle bursts and the egg is released. This process is the ovulation. A cyst in the ovary occurs when a follicle doesn’t burst and grows because of moisture accumulation.
There are several types of ovarian cysts:

The vast majority of cysts are small, benign and cause no symptoms. They disappear on their own. However, some ovarian cysts do cause symptoms, such as:

It’s a fairly common disorder, which is especially seen among girls and women in the childbearing age. A malignant cyst that causes ovarian cancer, is extremely rare and is mainly seen in women older than forty years.

Since most ovarian cysts don’t cause symptoms, they are often discovered by chance. When symptoms indicate ovarian cysts, an internal examination is performed. With a CT scan or ultrasound, the diagnosis can be confirmed. If the cyst is suspected to be malignant, the cyst can be further investigated by means of laparoscopic examination. If necessary, a piece of tissue (biopsy) is taken away for further examination.

In principle, small benign cysts don’t have to be treated. Regular checks by the gynaecologist are usually advised then. When there is doubt about the type of cyst or when the cyst is larger than seven centimeters in diameter, the cyst is surgically removed. In women older than fifty years, smaller cysts are sometimes also removed, because the risk of a malignant change is somewhat higher. Sometimes, the affected ovary is also removed. Malignant cysts are removed, along with the ovary and fallopian tube concerned. Painkillers and other anti-inflammatory medication may help to reduce pelvic pain.

The majority of ovarian cysts are benign and a full recovery can be expected. Most cysts heal spontaneously within six to eight weeks. With medication or surgery (laparoscopy or laparotomy), cysts that don’t dissolve spontaneously can be treated.