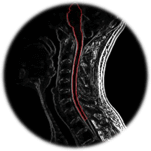 Multiple sclerosis (MS) is a chronic disease of the central nervous system. This may, among other things, cause problems with walking, feeling and seeing. The effects of MS are very serious, the disease can lead to paralysis. The cause of MS is still unclear, but an autoimmune disease seems most likely. The disease can currently not be cured.

In case of MS, the insulating layer surrounding the nerves (the myelin sheath) gets slowly broken. Therefore, nerve impulses cannot fully pass through the nerves. The damage to the myelin is the result of uncontrolled activity of inflammatory cells. Why this happens is unknown. Which symptoms occur, depends on which nerve connection has been affected. The body can often repair the damage and the symptoms will restore. In the long run, however, the nerve cells itself are damaged. That’s not easy to repair, causing the symptoms to remain.

MS is a disease, which proceeds differently in each patient. Not all symptoms will occur in every patient. Common signs and symptoms are:

In addition to the symptoms themselves, the often erratic and unpredictable course makes living with MS for many patients extra difficult. While often believed, multiple sclerosis is not a muscular disease.

There is no single test that can diagnose multiple sclerosis. The neurologist can suspect the diagnosis based on the signs and symptoms of the patient. An MRI scan of the brains and/or spinal cord is generally the most suitable in order to confirm the presumption. Sometimes, a spinal tap (lumbar puncture) is useful. The neurologist will often do blood tests in order to exclude other diseases.
It is not uncommon that, in spite of these examinations, the diagnosis cannot directly be made with certainty. Sometimes it’s necessary to follow the symptoms for a longer period of time before the diagnosis is confirmed.

There are no medications that can cure MS. In recent years, medicines have been developed that would have a positive effect on MS itself. In addition, there are several types of medicines for treating the symptoms of multiple sclerosis.
Adrenocorticotripic hormones (including prednisone) are often prescribed when the symptoms of MS get worse. But there are also other drugs that can help with MS symptoms.

The course of the disease is variable and unpredictable, but periods of attacks and improvement generally alternate. On average, temporary worsenings of symptoms and flare-ups occur three times every two years. The periods of recovery will often be shorter after a period of time, until eventually hardly any recovery occurs. The degree of disability of the patient also increases progressively.