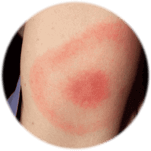 Lyme disease is an infectious disease, which is caused by a bacterium. This bacterium can only enter the body via a bite from an infected tick. Lyme disease can cause various symptoms. The disease can usually be treated well with antibiotics. The sooner it is dealt with, the better and more rapidly the treatment has effect.

Lyme disease is caused by the bacterium Borrelia burgdorferi. The disease is transferred to humans by ticks that have been infected with this bacterium. Infection usually occurs after the infected tick has been stuck on the human body for twenty-four hours. After a few days, the bacteria enter into the lymph and bloodstream and they can spread throughout the body. It can happen that a tick is infected with more than one bacterium and may also cause other infections. After infection, it takes three to thirty days before the first symptoms occur.
If a person is walking or camping in a forest in summer, then he or she runs the highest risk of being bitten by a tick that is infected. Especially if the skin is uncovered, there is more risk of a tick bite.

Early symptoms include a red ring-shaped rash around the site of the tick bite (erythema migrans, EM) and flu-like symptoms, such as headache, stiff neck, fever, muscle aches and fatigue. However, these symptoms can also be absent.
Later, various signs and symptoms can occur. Lyme disease is a multisystem disease, which can lead to, among other things, neurological (nervous system and brains), dermatologic (skin), rheumatologic (muscles and joints), cardiac (heart), opthalmologic (eyes) and psychiatric symptoms.

Lyme disease can be successfully treated with antibiotics if this is done early after infection. If a person has been infected for a long time, it gets more difficult to successfully combat the disease. There is disagreement about which treatment is best. The duration, dose and antibiotics to use vary from doctor. The ILADS, an international Lyme organization, advises in case of an EM a high dose over a period of six weeks. When a person has been infected for some time, the ILADS recommends antibiotics even for months or years, until the symptoms stay away.
There’s no vaccine for Lyme disease.

Lyme disease can cause (severe) heart and joint problems and nervous disorders. But usually, this disease heals well. The patient must take antibiotics within three to four months after the bite. Damage to joints and nervous system doesn’t always recover completely. Without treatment, the disease may eventually be fatal.
It is expected that an increased number of ticks leads to an increased number of cases of Lyme disease.