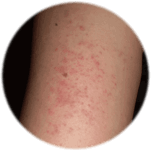 Keratosis pilaris (KP) is a very common, but harmless cosmetic condition. At the location of the hair follicles, the skin becomes slightly thicker and sometimes red, so that a certain roughness develops, which looks a bit like goosebumps. The condition occurs mainly on the extensor side of the upper arms and upper legs, sometimes also on the buttocks and in the face.

There is a disturbed maturation of the keratinocytes of the hair follicles. The underlying cause is unknown, but most likely it’s hereditary. The disease is sometimes accompanied by some itch or irritation. In people with atopy (predisposition to respond allergic), keratosis pilaris is more common.
It is believed that people who have this disorder, are predisposed to a sensitive skin, that can easily irritate or get inflamed.

Keratosis pilaris is characterized by small red papules (bumps) that are located right at the hair follicles. Often, the hair doesn’t grow well. The spots often feel rough or raspy and are one to two millimeters in size. Keratosis pilaris usually causes no symptoms, but sometimes bacteria can inhabit in the poorly grown hair follicles, causing minor local infections and inflammations, resulting in pimples.

The picture of keratosis pilaris is so clear to the dermatologist, that no additional examinations are necessary in order to make the diagnosis.

Keratosis pilaris cannot be cured. However, it’s possible to soften the rough nature of the skin by using creams that contain a keratolytic (horn solver), such as urea and salicylic acid.
The doctor may prescribe a fatty cream including vitamin A acid. A dermatologist can assess whether treatments like chemical peeling, laser or photodynamic therapy are an option.

The disease will generally remain for life. Periods of rest and worsening may alternate.