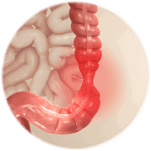 Irritable bowel syndrome (IBS) is a harmless intestinal disease, but can be very troublesome. In case of IBS, the intestine makes irregular, convulsive and spasmodic movements. The intestinal muscles contract too rapidly or just too slowly. Some IBS patients also (or only) suffer from a hypersensitive and irritable intestinal wall.

The cause of IBS is not known. Probably it’s a combination of factors. In any case, a disturbed (spastic) movement of the intestine and/or an extra-sensitive intestinal wall play a role. In addition, the following factors may have influence:

IBS symptoms vary from person to person. Even in one person, the symptoms can vary from day to day. Periods with and without symptoms may alternate.
The most characteristic symptom of irritable bowel syndrome is an aching, cramping or stabbing pain in the abdomen. this can be very severe. part of ibs patients have abdominal pain mainly in the evening and nighttime, whether or not accompanied by urge. the abdominal pain sometimes decreases after bowel movement or passing wind.
IBS is accompanied by an abnormal relief pattern. Part of IBS patients suffer particularly from constipation, while others have especially diarrhea. A relief pattern, in which constipation and diarrhea alternate, is also common. The relief pattern may change during the day. Sudden, not sustainable urge is common.
Additionally, IBS patients often have other gastrointestinal symptoms. Common symptoms are gas, flatulence, bloating, abdominal distension, acid reflux, difficulty swallowing and lump in the throat.
Examples of symptoms outside the gastrointestinal tract are fatigue, muscle pain, back pain, headache, urinating problems, irregular menstruation and pain during or after sexual intercourse.

The general practitioner can often make the diagnosis of irritable bowel syndrome based on the symptoms. If there are doubts about the cause of the symptoms, the general practitioner will refer the patient for further examination. This may include stool tests, blood tests, ultrasound and several types of endoscopy, such as gastroscopy and colonoscopy. When no physical defects are found, the diagnosis of irritable bowel syndrome can be confirmed.

IBS cannot be cured with medication, but medication can reduce the symptoms. They are intended to improve the bowel movements, to control the pain or a combination of these.
In some cases, the symptoms of IBS patients can be reduced by hypnotherapy or pelvic floor physical therapy. With hypnotherapy, a person learns under hypnosis to positively influence the intestines. In pelvic floor physical therapy, the patient learns to train the pelvic floor muscles, because IBS symptoms can be caused by problems with the pelvic floor muscles.

IBS is not a serious, but a nasty disease that can have an impact on normal life. A day out, for example, is difficult when there is diarrhea. Flatulence during an important presentation can also be very annoying.