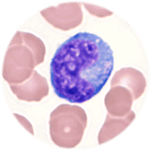 The cause of the disease is the Epstein-Barr virus (EBV), a herpes virus. This virus multiplies in the white blood cells, which eventually will harm the functioning of the immune system. The disease is most common among young people. Anyone who once had the disease, has become immune for it. This means that a person can never get the disease anymore. Small children often come in contact with the disease without becoming very ill, but this makes them immune anyway. After infection, it takes four to seven weeks before the first symptoms occur.
The virus is found in the saliva of an infected person. By direct contact (such as kissing), the virus may end up in the mouth of another person. Infection can also occur by eating and drinking with cutlery and cups that have been used by someone who is infected. By putting toys or pencils into the mouth, infection can also occur. From one week after infection, people can excrete the virus during a long time and infect others. Because many children go through the disease unnoticed and the virus can remain in the saliva for a long time, it’s difficult to avoid contamination.

Infectious mononucleosis causes a severe, prolonged fatigue. At the slightest effort, the patient is already very tired. It looks a lot like flu, because the patient suffers from fever, sore throat and headache. With an ordinary pharyngitis, the sore throat usually passes within a week, but in case of infectious mononucleosis, the sore throat often lasts longer. Characteristic of infectious mononucleosis are swollen lymph nodes in the neck, armpits and groin, which arise after about two days. The patient can also have jaundice or a rash that looks like rubella. There are small, thick red spots and pain in the chest, difficulty breathing and a lot of coughing.
All symptoms usually disappear after two or three weeks, but then the patient will be weak, dull and perhaps feel a little depressed for at least another two weeks.

The general practitioner will usually look into the throat and feel whether the lymph nodes in the neck are swollen. Blood tests must confirm the diagnosis of infectious mononucleosis. Antibodies to the Epstein-Barr virus are found in the blood then. However, the test doesn’t clarify the duration and severity of the disease.

There are no special medicines for infectious mononucleosis. However, the disease is usually harmless and passes on its own. The patient has to take long rests. This is particularly important in the first weeks, because otherwise the recovery takes much longer. How long the disease exactly lasts is unpredictable; it may be weeks but also months. Recovery may therefore take a long time, in which fatigue and lack of energy can persist for months. Vaccination against the disease is not possible.

Virtually every infectious mononucleosis patient recovers completely, but it may take a long time and the extreme fatigue may persist for weeks or months. After infection, with or without symptoms, a person is immune for life. A complication of infectious mononucleosis, which very rarely occurs in the acute phase, is an enlarged spleen and possibly a damaged liver, which causes jaundice.