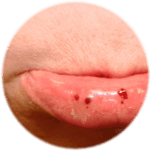 Ideopathic thrombocytopenic purpura (ITP) is a blood clotting disease. People with this condition bleed sooner than normal, because the body breaks down the blood platelets (thrombocytes) too rapidly. This creates a shortage of platelets. ITP is a rare autoimmune disease. In young children there is always an acute form, in adults the condition is often chronic.

The cause of ITP is not known. Viral infections or particular medications can sometimes trigger the disease, but usually the disease arises spontaneously. Although ITP is probably not hereditary, there are some families in which the disease seems to have passed from parent to child.

People with ITP may experience the following signs and symptoms:

Also bleedings in, for example, the joints, stomach and intestines may result from severe forms of the disease.
ITP can be acute or chronic. The acute form is most common in children between two and eight years and often follows an infection. Most children recover within a few months. The chronic form of the disease develops gradually and usually begins with mild bleeding. This form occurs most frequently in people between twenty and forty years.

The diagnosis of ITP is based on the symptoms and diagnostic tests. Blood tests are done to determine the number of platelets and red blood cells and to assess the clotting capability of the blood. A bone marrow biopsy is sometimes taken in order to detect any defect in the precursors of the platelets and to exclude other bone marrow diseases.

The treatment for people with ITP varies form person to person. It depends, for example, on the form (acute or chronic) and severity of the disease. In consultation with the doctor, there will be agreed which treatment is best. Possible treatments are:

After treatment with corticosteroids and removal of the spleen, the prospects are favorable. In adults, however, the condition can also further develop or return after treatment.