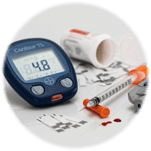 Hypoglycemia is a disease, in which a person has a low blood sugar (blood glucose) or a highly fluctuating blood sugar. This is because the body produces too much insulin. Hypoglycemia is a temporary condition that rarely occurs in healthy people, but occurs mainly in people with diabetes mellitus.

Various causes may underlie the development of hypoglycemia:

Newborns with a high birth weight may temporarily develop hypoglycemia after birth, because they haven’t regulated their diets properly yet.

Hypoglycemia can be identified by the following signs and symptoms:

These symptoms may also occur for other reasons and don’t necessarily mean that there is hypoglycemia. Most hypoglycemia attacks occur at night.

The diagnosis of hypoglycemia can be made by measuring the amount of glucose in the blood. People with diabetes often have a measuring device, with which they can do this themselves.

The treatment of hypoglycemia is mainly aimed at bringing the disturbed metabolism in balance. In the short term, one can take care of this by taking food. The blood sugar will rise, at least temporarily. The problem is, however, that the body, immediately with the rising of the blood sugar, will produce hormones in order to get the blood sugar down. After some time, the blood sugar will thus be low again.
An unconscious patient can be treated with a direct injection of glucagon or intravenous administration of glucose in a hospital.

In people with diabetes, the prospects are excellent if they follow their prescribed insulin dosage, recommended diet and guidelines for physical exercise. However, if the blood sugar is much too low (final stage), this may lead to epileptic seizures, loss of consciousness, coma and stroke. If the hypoglycemia is very severe, it can even lead to death.

In case of an attack of hypoglycemia, the following recommendations are valid:

There are the following dietary advices, when a person often suffers from low blood sugar: