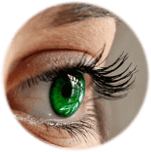 Eye movement desensitization and reprocessing (EMDR) is a therapy for people who keep suffering from the consequences of a shocking experience, such as an accident, sexual assault or an act of violence.

EMDR is based on many therapeutic techniques. The conversation protocol is based on behaviour therapy and cognitive therapies. An essential element is changing the attention each time from left to right with eye movements (the therapist goes back and forth with his or her fingers at a distance of about twenty-five centimeters in front of the patient’s face). Sometimes left-right sounds are delivered via headphones or left-right touches on the knees (‘tapping’). Despite extensive research, the precise mechanism of action behind the ‘left-right’ is still unknown.

EMDR is intended for the treatment of people with posttraumatic stress disorder (PTSD) and other trauma-related anxiety disorders. These are problems that have arisen as a direct consequence of a concrete unpleasant event, of which the memory still evokes an emotional response.

The sets will gradually lead to the situation that the memory loses its strength and emotional charge. Thus it’s getting easier to think back to the original event. In many cases, the memory images themselves change and, for example, they become fuzzy or smaller. But it may also be that less unpleasant aspects of the same situation emerge. Another possibility is that new thoughts or insights emerge spontaneously that give a different, less threatening, meaning to the event. These effects contribute to get the shocking experience more and more included in the patient’s life history.