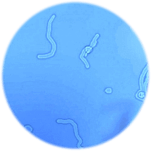 Eye floaters are small protein structures and cellular residues, contained in the vitreous of the eye. As a result, all kinds of strange shapes are perceived, such as small cobwebs, spheres or wires. It is a fairly common condition, but some people have so much eye floaters, that visibility is seriously hindered.

The vitreous is the gel-like substance which the eye is largely filled with. Eye floaters can have several causes:

People with eye floaters see moving spots, especially when they look at a clear blue sky or a white background. The compactions in the vitreous cast a shadow onto the retina in incoming light. The moving spots that are thus perceived, can be annoying but aren't serious. There is a great variation in the number, size and shape of the floaters.
After a vitreous detachment, the symptoms may increase. The vitreous is then much more agile and contains more compactions due to shrinking. These compactions can sometimes lead to troublesome spots in the center of the sight, which could make reading difficult. The symptoms usually reduce over time, by habituation or because the floaters sag and thus become less disturbing.

Distracting eye floaters can be removed by laser treatment. This is a technique, which is only performed by some ophthalmologists around the world. The risks are very low. When over 45 years of age, the success rate is about seventy to ninety-five percent. People younger than 35 can often not be helped with laser.
The vitreous can also be removed by means of a vitrectomy. With the arrival of advanced surgical instruments, the turbid vitreous may be removed under local or general anesthesia. After this operation, the sight is clear again. However, vitrectomy is not without risk. It is therefore only used when there are proven serious symptoms.

Eye floaters are very annoying, but not harmful to the eye, unless they are accompanied by cracks in the retina. Eye floaters may eventually be somewhat smaller. Some floaters can change location or even disappear. People usually get more accustomed to the spots.