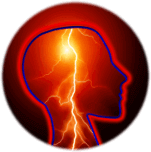 Epilepsy is a brain disorder with seizures. These seizures are caused by a sudden, temporary disruption in the transfer of electrical impulses in the brains. The seizures vary by person. One person loses consciousness, falls and shocks with arms and legs. The other is suddenly not responsive for a moment, stares ahead or drops something off the hands.

An epileptic seizure results from a sudden, temporary disruption of the electric equilibrium in the brains. It’s like a kind of ‘short circuit’ in the brains. In half of epileptic patients, there is no apparent cause. In the others, epilepsy is caused by other brain disorders, such as brain injury in an accident, brain tumor, infection in the brains, stroke or oxygen shortage.
It’s usually not clear why a person with epilepsy has a seizure at some time. The seizure comes, as it were, out of nowhere. In some cases the reason is clear. For example, some people get a seizure in the following situations:

The symptoms of an epileptic seizure may include involuntary body movements and a decrease or loss of consciousness. Urinary losses and, for example, biting the tongue can also belong to the seizure. The patient may first have strange sensations through the senses, such as seeing flashes or smelling scents; this is called an aura. An epileptic seizure doesn’t always attract attention, sometimes a person is just ‘gone’ for a while (this is called an absence). Roughly a third of patients have less than one seizure per year, one third has one seizure per month and one third has more than one seizure per month.

The general practitioner will refer the patient to a neurologist for examination and treatment of epilepsy. The diagnosis of epilepsy requires several examinations. The story of the patient is difficult here, because the patient was unconscious during the seizure. Therefore, use is made of the description of the seizure by others (heteroanamnesis). Apart from the story of bystanders, video footage taken with a mobile phone provides a doctor with a lot of information about what kind of seizure it was. Other examinations are:

The following treatment methods can be applied:

Epilepsy can usually not be cured. But in general, the quicker the seizures are brought under control, the better the prospects are. About half of the patients with epilepsy have had, twenty years after the diagnosis was made, no seizure for at least five years and don’t have to use anti-epileptic drugs.