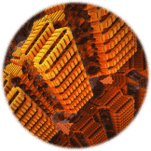 The Dix-Hallpike test is an examination, in which dizziness is generated in a patient, by tilting him or her backwards. Eye movements will also be recorded.

The Dix-Hallpike test is used to determine the diagnosis of vertigo.

The head and upper body of the patient are suddenly tilted backwards from a seated position. Usually, a typical eye movement is also visible, which can be recorded with a video camera during the test.

During the Dix-Hallpike test, the head is rotated 45 degrees to the right (respectively to the left) in a seated position, after which the patient is quickly laid down on his or her back with the head in a slightly drooping position. When the patient hereby experiences symptoms of dizziness and the therapist sees specific eye movements, the test is positive and treatment can be started.
The examination takes about 30 minutes.