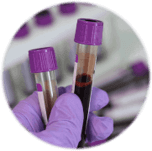 The D-dimer test measures the amount of D-dimer in the blood and is used to detect the presence of a blood clot in the bloodstream. Blood clots can arise in diseases with a (temporary) increased tendency for blood clotting. The determination is made by blood tests.

The D-dimer test is used to determine whether a person has thrombosis.

D-dimer is a substance, derived from a blood clot and is only present in the blood when there is also (or has been) a clot. D-dimer is released if the blood clot is broken down.

A tube of blood is taken from a vein at the inside of the arm, usually in the fold of the elbow. In order to see and feel this vein well, a tourniquet is pulled tight around the upper arm. The vein is punctured with a hollow needle, through which the blood is sucked into a tube. The results of the test are available after 10 to 30 minutes.