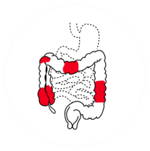 There are several factors that may have an impact on the development of Crohn’s disease:

Poor living conditions decrease the risk of developing Crohn’s disease. Breastfeeding reduces the probability that the offspring will develop the disease.

The symptoms can vary significantly from person to person. Patients are often life-long affected, but there are periods with little to no symptoms. An attack can be quite severe and may well last a few weeks to months. Common signs and symptoms are:

In addition to these symptoms, other symptoms can occur too, such as fistulas, joint pain and eye and skin disorders.

Making the diagnosis often takes some time, because it isn’t always clear what exactly is going on. Currently there is no simple test to determine Crohn’s disease. Apart from physical examination, further investigation is also required to make the diagnosis:

The treatment of Crohn’s disease basically includes medication. Although drugs cannot cure Crohn’s disease, the treatment will usually ensure a reduction of symptoms and the inhibition of the inflammation. The medicines can also prevent the emergence of new infections. Some people are due to medication even (almost) free of symptoms. The following groups of medications are prescribed for Crohn’s disease: anti-inflammatories, immunosuppressive drugs (immunosuppressants), TNF blockers, antibiotics and diarrhea inhibitors.
When medications don’t help sufficiently, surgery is sometimes necessary. An operation may also be necessary when a narrowing or blockage of the intestine has occurred. Inflamed areas or narrowings in the intestine are then removed by the surgeon. In some cases, a (temporary) stoma is applied after bowel surgery.

The course is unpredictable, the disease emerges again and again. About seven out of ten persons with Crohn’s disease are eventually being operated. The expected average life span can be slightly shortened by complications and operations. Regular monitoring by means of endoscopy may be needed to keep track whether no cancer of the large intestine develops.