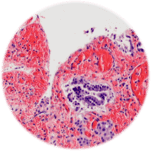 In the beginning there is mainly a severe, persistent pain in the right upper abdomen. The pain often increases with deep breathing and may radiate to the right shoulder blade. Another characteristic is the sharp pain that the patient feels when pressure is exerted on the right upper abdomen. Besides pain, symptoms like nausea and vomiting are common. Some of the patients have fever or temperature. Discolored stools and dark urine are signs that the bile ducts have been blocked up.
In case of chronic cholecystitis, a thickening of the gallbladder wall may occur and sometimes shriveling of the gallbladder.

The diagnosis is often made on the basis of the symptoms in combination with blood tests. Blood tests can clarify whether there is an infection or inflammation. In addition, blood tests into the liver function can demonstrate reduced discharge of bile. In the blood can be seen, for example, an increased content of bilirubin. Gallstones in the gallbladder or bile ducts can be demonstrated with ultrasound. A thickening of the wall of the gall bladder, due to inflammation, can also be seen on ultrasound. Sometimes, an ultrasound provides insufficient clarity. In that case, a CT or MRI scan could be done.

The treatment of cholecystitis consists of antibiotics, painkillers and administration of fluid via an infusion. When the inflammation spreads or returns, in spite of the treatment, the gallbladder must be removed. Nowadays, this procedure is carried out as soon as possible after the first symptoms. This can be done during a laparoscopy or by open surgery. The first method is a keyhole operation and is preferred.
Gallstones in the bile ducts can sometimes be removed by means of an Endoscopic Retrograde Cholangiopancreatography (ERCP). This is a keyhole operation of the bile ducts, in which the doctor can perform minor interventions. With a flexible tube (endoscope), the doctor can get through the mouth, esophagus, stomach and duodenum into the bile ducts. With the aid of a gripper, which can be passed through the endoscope, the doctor can remove the gallstones.

The overall prognosis for cholecystitis is favorable. In some people, complications may occur when other organs are involved. Gallstones can return in the bile ducts system after surgical removal of the gallbladder.
People can basically live well without a gallbladder. The gallbladder only has a temporary storage function. Bile is produced by the liver. In people without gallbladder, the bile is continuously delivered in small quantities to the small intestine.