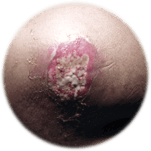 A carbuncle is a boil which is larger and more serious than an ordinary boil. It can also be a group of boils that are so close together that they form one big boil. Carbuncles can occur anywhere on the skin where hair grows, but often they arise in the neck. They are very painful and the person can be quite ill.

A carbuncle has more than one crater (skin opening) and is more serious than a normal boil, because it penetrates deeper into the skin. This can affect the underlying tissue. A carbuncle is caused by inflammation of a hair follicle. The result is a pus-filled cavity, also known as abscess. The inflammation is usually caused by staphylococcus bacteria. When the immune system is lowered, a person is more susceptible to carbuncles. The risk of developing carbuncles is also higher in older people and diabetic patients.
The pus coming out of the carbuncle is very contagious, causing new pimples to arise. After infection, it usually takes four to ten days before the first symptoms occur.

Signs and symptoms of a carbuncle are:

The diagnosis of carbuncle is based on the medical history, the story of the patient and the symptoms. A little pus is sometimes taken for examination, in order to find out which bacteria caused the infection and to prescribe the appropriate medication.

Carbuncles usually cure well and without complications, although sometimes with scarring. However, the possibility exists that the condition recurs.