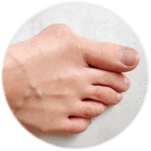 By far the most common cause of bunions is prolonged wearing of poorly fitting footwear, usually with a narrow pointed nose that forces the toes into an unnatural position. Bunions are sometimes caused by arthritis or polio. Heredity may also play a role. However, the latter causes are only a minority of the causes of bunion.

The most significant symptom with bunion is pain in the big toe, which is often the most severe after exercise. The swelling on the inside of the foot causes increased friction and pressure in the shoe. This can be accompanied by redness. Namely, the foot doesn’t fit well in the shoe anymore, allowing the bump to constantly slide along the shoe. This can be very painful.
People with bunion often get abnormal calluses, pain or tired feeling under the forefoot. The second toe can be overloaded. That is due to the fact that this toe is more loaded during the gait cycle. People with bunion may have trouble finding suitable footwear.

The diagnosis of bunion is determined by physical examination, combined with an X-ray to see if there is also wear of the toe joint between the metatarsal and the big toe. On this X-ray can also be seen how severe the deformity is. This can be measured and expressed in degrees.

In case of a bunion, there is always first tried to resolve the problem without surgery. This mainly involves the adjustment of the shoes. Shoes of soft leather are comfortable and can be stretched at the site of the pain. In addition, wearing high-heeled shoes with a narrow point is strongly discouraged. If there is an underlying cause, such as flat feet or calluses under the ball of the foot, the problems can often be corrected with an insole. There are also special splints for the toes. These splints are tailored and push the toe into proper position. This can significantly reduce the pain in the foot.
If the above treatments don’t help, it may be decided to perform an operation in which the deformity of the big toe is removed. For this, various techniques are available. The operation is usually a combination of osteotomy, arthrodesis and restoring the soft tissues. Osteotomy is sawing the bones in the toe and assemble them again in the correct position. Arthrodesis is fixing the joint between foot and toe. Finally, soft tissues are the structures around the joint of the big toe. These are often stretched by the bunion and can be shortened.

Most patients are doing well after treatment. Proper footwear is necessary in order to ensure that the condition is not going to recur in the long run.