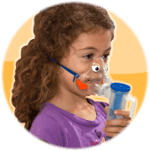 Asthma is a chronic disease of the airway. From time to time, an asthma attack may occur. This is characterized by inflammation and narrowing of the airway, chest tightness, coughing, wheezing and shortness of breath. The severity of the symptoms can vary per patient, ranging from mild to life-threatening.

The exact cause of asthma is unknown. Research has shown that genetic predisposition may play a role. When one or both parents are asthmatic or allergic, chances are that the child has a predisposition to a sensitive airway too.
When a child with a predisposition to asthma or allergies comes into regular contact with allergic stimuli (allergens), such as dust mites or pets, he or she can develop an allergy. A person who has an allergy, is more likely to get asthma as well. Eight out of ten people with asthma also have allergies.
Sometimes, there is another cause of asthma. Premature infants and children whose mothers smoked during pregnancy, suffer more often from asthma or allergy. A low birth weight can also contribute. Some people have so-called occupational asthma, which is caused by frequent and prolonged inhalation of chemical substances, such as paint or asbestos.

One of the main symptoms of asthma is tightness of the chest. In the event of an asthma attack, a person may feel that he or she suffocates. This is because the lungs get overfilled with air, they cannot refresh properly. Chest tightness is a bad feeling, but is basically not dangerous. Some people with asthma cough a lot. Mucus may come with the coughing: because of overstimulation, the mucosa in the nose and lungs produce more mucus than normal. Coughing is a natural response of the body to ensure that the mucus detaches and can be spit out or swallowed. Mucus that remains in the airway, causes chest tightness.
Wheezing is also a common symptom of asthma. The trachea and the bronchi (the branches of the trachea to the lungs) are narrowing, because the surrounding muscles are getting cramped. Thus, there is less space for the air to pass through. Rasping or sawing breathing occurs when the nose or throat are ‘cloggged’ during the day.
A person with asthma can sometimes be short of breath. The patient is rapidly out of breath and then tends to gasp for air. Being short of breath, often makes panting. This is because it feels like the lower part of the lungs are ‘clogged’, so short breaths are taken.

To diagnose asthma, the lung function is measured. With a spirometer, the blowing force and other characteristics of respiration are measured. In order to determine whether there is an allergy, a skin test or RAST test is done.
In a skin test, possible allergic substances are injected into the skin. If a person is allergic to the substance, a swelling arises. With a RAST test, blood is tested for specific allergens. This test can already be done in infants.
By means of a provocation test, the response of the airway to non-allergic stimuli from the outside are examined. Several histamine solutions are to be inhaled, in increasing strength. By measuring the lung function before and after stimulation with these substances, the response of the airway to these substances can be determined.

The most important medication for the treatment of asthma are anti-inflammatories and bronchodilators. Anti-inflammatory drugs combat inflammation in the airway. They protect the airway from stimuli. Bronchodilators ensure that the airway becomes wider, so that an attack can be remedied or prevented. Bronchodilators also help with shortness of breath at exercise-induced asthma.
Others medicines can complement the treatment of asthma, such as anti-allergy drugs, annual flu vaccination against viral infections and antibiotics for a respiratory infection caused by bacteria.

It is not possible to cure asthma. But nowadays it is possible to grow old with it, regardless of the age at which the disease begins. One will eventually find a way to deal with asthma as well as possible.