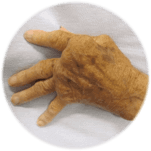 Arthritis is a painful, chronic inflammatory disease of joints. It usually starts at the fingers and toes. There is inflammation fluid formed instead of synovial fluid. The cartilage and bone in the joints are damaged. Tendons and bursae, located near the inflamed joints, can also become inflamed.

Arthritis is an autoimmune disease. This means that the body produces antibodies against itself. In this case, antibodies against the tissue at the inside of the joint. This causes inflammation that can damage the joints. Why a person gets arthritis is not known. Heredity plays a minor role. Arthritis can already occur at young age.

In case of arthritis, a person suffers from pain, stiffness, swelling and hot joints in the hands, wrists, ankles or feet. The symptoms are severe pain when pressing and moving the affected joint, fever and redness of the skin. But even without movement or load, an inflamed joint hurts. The symptoms are usually present at both the left and the right side in the same joints. In the morning and after a period of sitting or lying in the same posture, the joints are stiff for half an hour or longer. By moving, the joints gradually become supple again.
Furthermore, arthritis can cause the following symptoms: fatigue, alternating periods of more or less problems and rheumatoid nodules in the skin, usually at the elbow or forearm.
When arthritis really flares up, the patient can feel sick with a fever. One can even get anemia and start losing weight. Without treatment, joints may eventually become deformed. In the joints of the hands, for example, thick bumps can arise, caused by bone growth. The course of the disease is capricious.

The doctor makes the diagnosis of arthritis primarily on the basis of the signs and symptoms of the patient. In addition, the result of blood tests can support the diagnosis. The joint damage is sometimes visible on an X-ray image.

Medications are in case of arthritis the most important remedy to slow down inflammation and reduce pain. This is not a single course, there are always one or more drugs needed:

Apart from medications, there are many types of alternative treatments, such as acupuncture, homeopathy, herbs, alternative diets or massage. Sometimes, people with arthritis experience a positive effect.

Nowadays, arthritis is recognized earlier, so that the disease is no longer such a debilitating illness as it used to be. Most people who get the disease now, may lead a reasonably normal life. However, lifelong medication and possible adjustments of activities are required. To monitor the progress of the disease and response to the medicines, blood must be checked regularly.