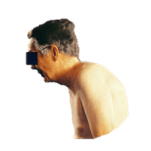 Ankylosing spondylitis (AS) is a rheumatic disease, leading to chronic inflammation. Especially the joints of spine and pelvis can become infected, as well as the knees and shoulders. The spine gets stiff and sore and sometimes crooked, which seriously hinders the mobility of the spine. Ankylosing spondylitis can significantly affect everyday life.

Little is known yet about the onset of ankylosing spondylitis. It is suspected that certain bacterial infections in the body, and especially of urinary tract and intestines, may lead to this disease in people who are susceptible to it. In this case, there is a long period between infection and the emergence of the first symptoms. Ankylosing spondylitis is common in people suffering from ulcerative colitis, a chronic inflammatory bowel disease. It is certain that a hereditary factor also plays a role.

Ankylosing spondylitis starts with pain and stiffness, especially in the lower back. The symptoms occur mainly at night and in the morning or when a person has been in the same position for a long time. After the spine, also joints of the shoulder, hip and knees become inflamed. The condition deteriorates and the patient is often tired. At a later stage, the eyes, heart and other organs can also get inflamed. Inflammation of tendon attachments occurs regularly, particularly of the Achilles tendon. In addition to the symptoms above, ankylosing spondylitis can cause intestinal and skin problems.

The diagnosis of ankylosing spondylitis is often based on the story of the patient and the physical examination. Blood tests can support the diagnosis. The doctor then measures the sedimentation rate of red blood cells and antibodies. At a later stage, damaged joints can be seen on an X-ray. Several other examinations are also possible.

No cure is available, but good treatment may slow down the disease and ensure that the patient will continue functioning as well as possible.
With ankylosing spondylitis, simple painkillers or anti-inflammatory painkillers are prescribed. The type of drug depends on the symptoms. Also biologicals can be prescribed; these are drugs that are made up of proteins. In addition to medications, the patient is advised to exercise.
In the case of serious damage to the joints, severe pain and loss of function, the doctor may recommend surgery. That may be surgery to the hip, shoulder or knee. If the spine is badly crooked and this seriously limits the patient, back surgery may be necessary to put the back straight again. This kind of surgery is done in specialized hospitals.

Ankylosing spondylitis is not curable, but the life expectancy of patients is generally normal. The treatment is aimed at relieving pain and stiffness. However, patients can do a lot themselves to positively influence the symptoms and the course of the disease.